Units of History - The Exploratores: Scouts of the Roman Army DOCUMENTARY

In this Units of History documentary, learn about the Exploratores and the Scouts of the Roman Army. The first 100 people to go to https://www.blinkist.com/invicta are going to get unlimited access for 1 week to try it out. You’ll also get 25% off if you want the full membership.

We continue to look at the most famous units of history from across ancient history. While previous episodes have focused on the combat roles of units like the Spartan Royal Guard or the Immortals, in this episode we look at the critical role a unit could play in the intelligence game.

The documentary begins with the early history of Rome and the relatively low level of its scouting needs whilst in familiar territory. However we show that as it expanded across Italy and in particular abroad, it quickly realized that a more robust system of scouting had to be established. What emerged was the Procursatores, a close screen of cavalry who fanned out ahead of the legions of Rome. We discuss the role of these troops when it comes to patrolling, pathfinding, and foraging.

However these troops could not cover all the needs of the Roman Army. What soon developed was another group of further range scouts and disruptors known as the Exploratores. We cover how they were used to report on the enemy, locate Roman army camps, and perform operations behind enemy lines.

Stay tuned for our next episode where we will discuss the spies and Speculatores who further added to Rome's impressive intelligence network that helped the Roman Legions become so successful.

Sources and Suggested Reading
The Roman Army by Adrian Goldsworthy
Roman Warfare by Adrian Goldsworthy
Intelligence Activities in Ancient Rome by Rose Mary Sheldon
Exploratio: Military & Political Intelligence in the Roman World from the Second Punic War to the Battle of Adrianople By N. J. E. Austin, N. B. Rankov
Spies and spying in Caesar’s “Bellum Gallicum” by Jane Crawford
The "Missing Dimension" of C. Julius Caesar by Amiram Ezov
The Scouts of the Late Roman Army and a Disputed Etymology by Philip Rance

Units of History - The Exploratores: Scouts of the Roman Army DOCUMENTARY 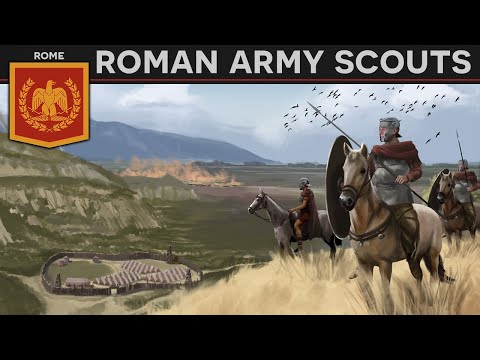 In this Units of History documentary, learn about the Exploratores and the Scouts of the Roman Army. The first 100 people to go to https://www.blinkis...